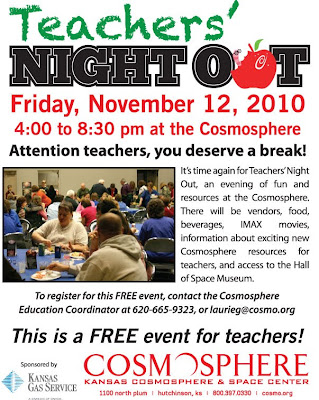 Teachers' Night Out at the Cosmosphere is set for November 12. It's free. Contact laurieg@cosmo.org to reserve your spot. Sponsored by Kansas Gas Service, a division of ONEOK.
at 9:32 AM No comments:

Our email newsletter trivia question was:

On which missions were lunar rovers used?
Answer: Apollo 15, 16 and 17

If you'd like to play future trivia games, you can
sign up for the email newsletter and have a chance to win prizes, too.

Congratulations, Betsy!
at 8:27 AM No comments: 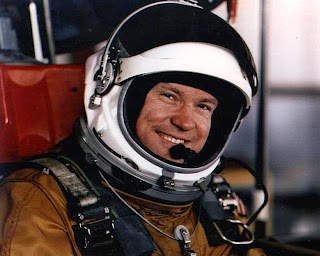 Rocketober-Fest at the Cosmosphere on Saturday, October 23, is an afternoon of fun for the entire family. It's from 1-4 p.m.

Activities will include making buttons and solar system bracelets, experiencing the 4-G simulator and watching weird science demos. Kids will also be able to launch their own air rockets and enjoy liquid oxygen ice cream, as well as other activities.

Come in your space or alien-themed costume and enter the costume contest. Downtown Hutchinson and Walmart are providing gift cards for the winners. Register for the contest by 2 that day.

Some items require a Rocketober-Fest ticket, and some are free and open to the public.

Free Science Demonstrations during the day

Ticket Prices are as follows:

Tickets will be available at the door.
at 3:08 PM No comments:

Coffee at the Cosmo October 21 - Man on the Moon on the Move: Lunar Rovers

Coffee at the Cosmo on Thursday, October 21, is entitled, “Man on the Moon on the Move: Lunar Rovers.” It is at 9 a.m. at the Cosmosphere and is free and open to the public.

Comedian Jerry Seinfeld joked, “Only a man would go 240,000 miles and take a car to drive around some more.” While he thought it was to try and impress women, come to the Kansas Cosmosphere and Space Center and hear the real reasons we took a “car” to the moon, learn how it operated, and as always, see fascinating artifacts directly related to the Lunar Rover.

Upcoming Topics Include:
November 18, 2010 “To Boldly Go Where No Product Has Gone Before: Brand Names in Space”
December 16, 2010 “Barbie Loves Buzz: Space Toys”
January 20, 2011 “The Sacrifice of Exploration: Tragedy in Space Flight”

The Kansas Cosmosphere and Space Center is a non-profit organization dedicated to enhancing patrons' knowledge of space exploration. Educating people from around the globe, the Cosmosphere boasts the Hall of Space museum, one of the most significant collections of U.S. and Russian space artifacts in the world; the Justice Planetarium, a dome-shaped classroom where attendees learn about astronomy; Dr. Goddard's Lab, a live demonstration of early rocket technology; the Carey IMAX® Dome Theater, one of the first ones built in the world; and summer astronaut training camps. For more information visit cosmo.org.
at 11:19 AM No comments: