Last month, Comet PanSTARRS delighted Southern Hemisphere observers; steadily brightening and forming a wispy forked tail.  Now it’s our turn in the Northern Hemisphere as the icy rock swings around the sun into our evening sky.  From the middle to the end of March, PanSTARRS skirts low above the western horizon after sunset. 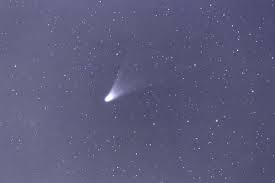 If you’d like to observe this comet, the first step is to find a clear western horizon.   You must be able to see the sky meet the ground– no trees, houses, or superstores in your view.  Go out shortly after sunset and look toward the west.  You will be looking for a wispy object with a short tail.  Seeing it could be challenging since it must compete with evening twilight. 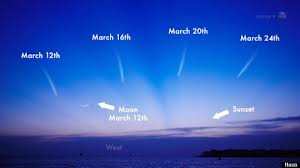 The best time to search for PanSTARRS is on the evening of March 12 and 13.  On those evenings, a fingernail-shaped crescent moon hangs low in the west at sunset.  The moon can be used as a reference point to help locate the comet.  On the eve of March 12, the comet lies about two moon-widths to the upper left of the moon.  On March 13, it lies to the moon’s lower right.

Although PanSTARRS should be visible to the naked eye, binoculars will yield the best views.   On March 12 or 13, begin by locating and focusing on the moon with binoculars.  On the 12th, slowly sweep left and slightly upward of the moon, looking for a diffuse object with a short upward-extending tail.  Do the same on the 13th, except scan to the lower right of the moon.

The comet is visible for about an hour following sunset.  Then it too will succumb to the western horizon.  For additional help in finding the comet, a quick Internet search leads to pictures, finder charts and other useful information.

Once you have located the comet, you can continue to observe it through the rest of the month and into April.  Each night the comet drifts slightly to the north in relation to the background stars.  It also fades from night to night, as it exits the inner solar system and heads back to the cold black of deep space.


Comet PanSTARRS should be a nice predecessor to the much-anticipated Comet Ison, visible in November and December.  Expect more on that one as the time draws closer.  Until next time, Happy Stargazing!

Image Credits:  Top - Universetoday.com, Bottom - Huffingtonpost
at 8:37 AM No comments:


The Year of the Comet


As far as celestial events go, 2013 may very well be a year for the history books.

Two comets swing into the inner solar system this year, one next month and the other at the end year.  Both comets have the potential to reach naked eye visibility.  But the second may be bright enough to view during daylight.

What exactly is a comet anyway?  Comets are best described as dirty snowballs orbiting the sun at the outer edges of the solar system in a huge cloud known as the Oort Cloud.  When nudged by the gravity of a passing star, they are hurled in long elliptical orbits around the sun.  As the comet nears the sun, it’s icy material melts, forming an enormous tail of gas and dust.  Sometimes comets brighten so much they can be easily seen with the naked eye.

We begin with Comet PanSTARRS, which was discovered by the Pan-STARRS telescope in Hawaii in June 2011.  Throughout February, this comet is only visible in the southern hemisphere.   But in early March, PanSTARRS whips around the sun becoming an evening object for Northern Hemisphere observers.  It will grace the western sky after sunset from March 10 through the end of the month.

If we’re lucky PanSTARRS may reach naked-eye visibility and sport a wispy tailing extending upward.  The problem with comets though, is that they are notoriously unpredictable.  It may be a breathtaking object or it may be a dud.  Time will tell.  In next month’s article there will be more details on how to observe PanSTARRS and by then we hopefully will have a better sense of how bright the comet will be.

The real showstopper comes toward the end of 2013 in Comet ISON.  Discovered last fall as a very faint object in the cold depths of the solar system, this comet has a date with the sun on Thanksgiving Day.  ISON will graze the sun’s outer atmosphere, passing within a mere 680,000 miles from our star’s surface!  If it can hold together, and resist being torn apart by the sun’s immense gravity, it should emerge as a stunning object possibly brighter than the full moon.  Such magnitude would make ISON visible during the day!

Some are already calling Comet ISON the “Comet of the Century.”  But the unpredictability of comets can’t be overstated.  It could be a let down, as other comets have been.  In any case it is one to watch and you can bet that space enthusiasts around the globe will closely follow Comet ISON’s progress.  We at the Cosmosphere will as well.  Stay tuned for opportunities to observe with us.
at 9:17 AM 1 comment: