On Tuesday, June 5 the Cosmosphere will be holding a public observation of the Transit of Venus.  Unless by some miracle you will still be alive in the year 2117, this is your last opportunity to observe this rare astronomical event.  Just like Earth and the other planets, Venus is held in a continual orbit around the Sun by its immense gravity. Because Venus is inside Earth’s orbit, the planet passes between Earth and the Sun as it zips ahead of us on the fast track.  From our point of view it usually passes a little below or a little above the Sun and this is due to the slight inclination of Venus’ orbit compared to ours. 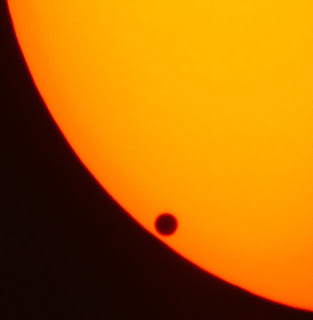 During most years, Venus would be invisible to Earthlings during the passage, because of the blinding Sun.  But on rare occasions, Venus, Earth and the Sun line up so that Venus actually crosses the Sun’s face.  With a solar-filtered telescope, Venus is visible as a black disc, taking about 6 hours to cross the Sun.
Like clockwork, these transits of Venus occur in pairs 8 years apart separated by 121.5 years and 105.5 years.  The first was predicted and observed by Jeremiah Horrocks in the year 1639.  Horrocks used a telescope to safely project the first ever visual observation of a Venus transit.   Transits also occurred in the years 1761, 1769, 1874, and 1882.  The last one occurred in the year 2004, completing the transit pairing for this century.
From 5:15 pm to around 7:30 pm (or whenever we lose the sun behind the western trees) Cosmosphere educators will be set up with solar-filtered telescopes in the parking lot across the street south of the building (old Hutch Floral lot) to provide a free public observation of this rare event.  Of course, any observation of the sky hinges on the ever-changing Kansas weather, so as always we hope for clear skies.
And we hope you will join us!
at 8:11 PM No comments:

Welcome to Brad’s Sky Stuff – a place where you can keep up with events that are up there in the sky.
If this month’s full moon seemed unusually large, that’s because it was.   On May 5, our closest celestial neighbor was just that – close. Known as a Supermoon, the May full moon was 221,000 miles from Earth (the average distance is 230,000 miles), making it about 14 percent larger and 30 percent brighter than other full moons of the year. Its slightly elliptical orbit causes the variations in the moon’s distance. Astronomers call the closest distance perigee and the furthest one apogee.
If you’re worried about a Supermoon slamming into Earth, don’t be.  There is absolutely no danger of such a cataclysmic event. 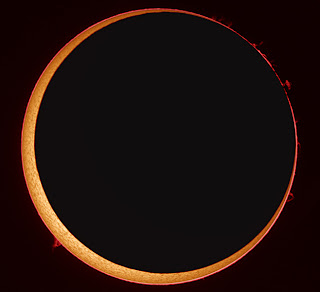 This month’s apogee of the moon occurs on Saturday, May 19 when it is 252,000 miles from Earth. The next day, on Sunday the 20th, the moon passes directly in front of the sun, creating one of nature’s most breathtaking spectacles, a solar eclipse. Because the moon is furthest away from Earth, it won’t entirely block out the sun. Instead it will leave an annulus (ring) of sunlight around the moon. Fittingly, such an eclipse is called an annular solar eclipse.   A total solar eclipse occurs when the moon is at perigee; the closer moon blocks out all of the sun’s light. 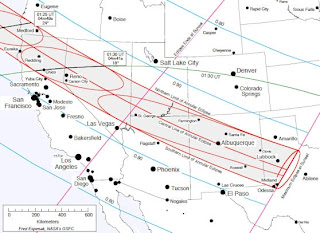 Not all observers are lucky enough to witness this month’s eclipse as a ring of light.  That privilege is bestowed upon those living within the narrow band in which the annular eclipse passes (See diagram to the right - those living within the red lines get an annular eclipse).  Those living outside that band will experience a partial eclipse.  The further one is from the band, the more partial the eclipse.  Only about two hundred miles wide, the band stretches from Southeast Asia, across the Pacific, and angles Southeast across the Western U.S. ending up in Northwest Texas.
For Kansans the partial eclipse begins around 7:30 pm and is still in progress as the sun sets an hour later.  Viewing the eclipse requires a clear horizon and cloudless western sky.
How does one observe a solar eclipse?  It can’t be overstated that you should never look directly at the sun with your eyes and especially not with binoculars or a telescope.  Doing so can cause permanent eye damage or blindness.  The safest way to observe a solar eclipse is indirectly, by projecting the sun’s image.  A pinhole projector can be made by using simple materials. For instructions on making such a device, visit exploratorium.edu/eclipse/how.html
It is also possible to safely view a solar eclipse with a #14 welding helmet.  Anything less than #14 does not provide adequate protection for your eyes.  Remember if you do plan to observe the eclipse, safety is paramount.  Unless you just like the idea of going blind, make sure you safeguard your eyes!  Happy Observing!
Questions?  Drop me a line at bradn@cosmo.org 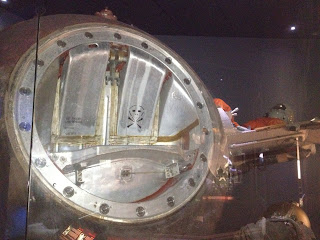 Forgive me gentle readers for my extended absence.  April was wonderfully, exhaustingly busy at the Cosmosphere, with teeming swarms of school children, special overnight education programs, scouts, and our very own tribute to our founder, Patty Carey last Saturday night.  Talk about the place to be.. the Cosmosphere is it.

I know you have all been holding your breath for over a month now, impatiently awaiting the #5 artifact in our Top Ten List of Most Fascinating Artifacts in the Hall of Space Museum.  Therefore, without further ado I present a truly remarkable piece of space history, the Russian Vostok.