"Aliens of the Deep" Opens September 20 at Cosmosphere 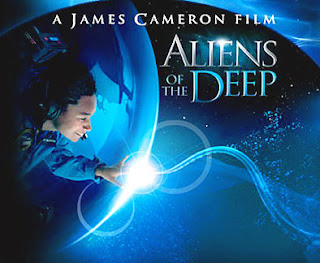 “Aliens of the Deep” takes you to some of the Earth's deepest, most extreme and unknown environments in search of the strange and alien creatures that live there. In this James Cameron film you journey to the ocean floor with a team of young NASA scientists and marine biologists who discuss how the unusual life found there may represent what we might encounter in space. It’s the most alien environment to be found on Earth so good training for those who will be traveling beyond the bounds of our atmosphere.

Six-foot tall worms with blood-red plumes and no stomach, blind white crabs, and a biomass of shrimp capable of "seeing" heat, all compete to find just the right location in the flow of the water. All other life on Earth is dependent on sunlight, but these ecosystems are as close to alien as we’re likely to find on Earth. The environment provides fertile training ground for people destined for space exploration, as they encounter life forms unlike anything they already know.
at 5:18 PM