The Cosmosphere at 50: In the Beginning 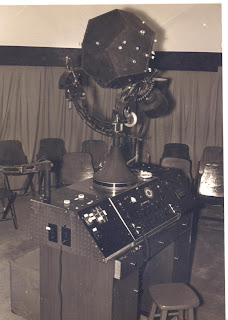 Why is there a space museum in Kansas? Why Hutchinson? These are two of the big questions we get asked here at the Kansas Cosmosphere and Space Center. People from all over the world come to visit our museum and are surprised to find such treasures in the Heartland of America. I don’t think I have ever been surprised myself about it, as growing up in Hutchinson it was ‘the norm.’ I will say I am impressed by the Cosmosphere. We have a supportive community of friends and museums who help us to maintain our stature as one of the premiere space museums in the world. Yet again you ask, why Hutchinson? It’s quite simple: someone had a dream.
Fifty years ago this year, Patricia “Patty” Brooks Carey started the Hutchinson Planetarium. The only planetarium in the state of Kansas at the time made its debut in the old chicken coop on the State Fairgrounds. Patty had a love for astronomy. This love of the stars is one of the reasons the Hutchinson Planetarium was created. In a single weekend, Patty gathered the finances from her community friends and neighbors to finance the purchase of a star ball. The first show, “Star of Bethlehem” opened December 2, 1962. 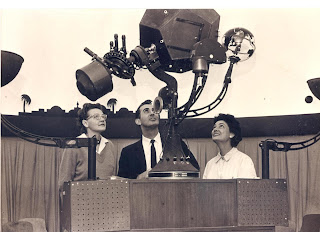 As the years went on, the Hutchinson Planetarium expanded and was relocated to the Cosmosphere’s current site at the Hutchinson Community College. In the 1980s, the Kansas Cosmosphere and Discovery Center maintained the Planetarium and other learning oddities, such as an Egyptian mummy and a real live snake! With Patty Carey leading the way and placing the right people in position, the Cosmosphere began to collect more and more space artifacts. The Kansas Cosmosphere and Space Center now houses one of the most comprehensive space artifact collections in the world.
Recently, I had the pleasure to sit down with one of Patty’s family members and take a stroll down memory lane. We were looking at old photographs and albums of Patty, which encompassed a large amount of Cosmosphere history. Patty was a world traveler by the age of ten. Astronomy was not her only love; she had a passion for history, the world, and public service. I was amazed at everything Patty Carey did in her lifetime. Her title as “Executive Mom” for the Cosmosphere was one of her most cherished roles.
In this 50th anniversary year of the Cosmosphere’s beginning, I hope to share with you all not only the Cosmosphere’s story, but Patty Carey’s story. Even more, though, I hope you all share back with us your stories and remembrances of Patty Carey and experiences at the Cosmosphere over the years.

Stay tuned! In the weeks to come, you’ll learn just how an Egyptian mummy became part of our past!
By Meredith Miller, Collections Manager
at 4:21 PM