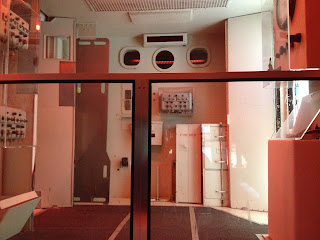 The countdown of the Top Ten Most Fascinating Artifacts in the Hall of Space Museum continues with the artifact in the sixth position. But, first let us review where we have been so far. At #10 was the Luna sphere from the Soviet Union; #9 were the RD 107 rocket engines, also of Soviet design. Filling the #8 spot were the slides rules previously owned by the German von Braun and the Russian Korolev. At #7 was the SR-71 spy plane. Who knows? Maybe, an artifact from the American space program will finally make the list at #6.
at 1:15 PM