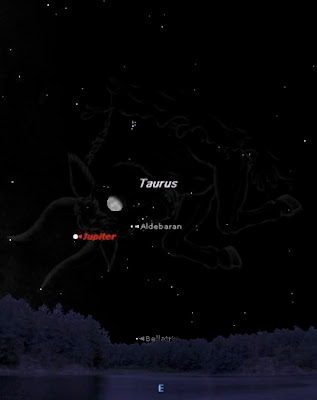 After residing in the morning sky through late spring and summer, mighty Jupiter returns to the evening sky this month.  It currently occupies the same sky region as the bright winter constellations.  At October’s onset, Jupiter ascends in the east around 10:30 pm against the distinctive stars of Taurus the Bull.   You should have no trouble finding Jupiter, however; the stars of Taurus can’t compete with the brilliant planet king.   To Jupiter’s right lies the reddish star Aldebaran, part of the Hyades, a V-shaped cluster of stars. 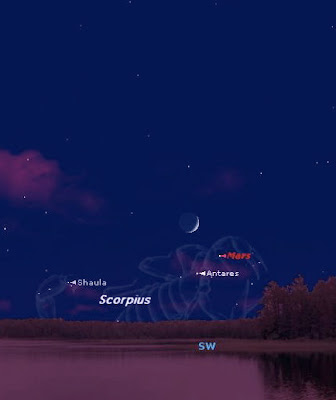 Directly above the Hyades you’ll find another star cluster known as the Pleiades.  Also called “the seven sisters” the Pleiades are a jewel of the night sky.  At a glance these bluish stars look like a fuzzy glob of light.  But a closer look reveals individual stars shaped like a small dipper.   Binoculars yield the best view of this famous cluster.  Tomorrow evening, the 4th, a waning gibbous moon forms a triangle with Jupiter and Aldebaran.  The Moon rides alongside Jupiter a second time on Halloween night.  A few days past full, our lunar neighbor provides some natural light for trick-or-treaters. 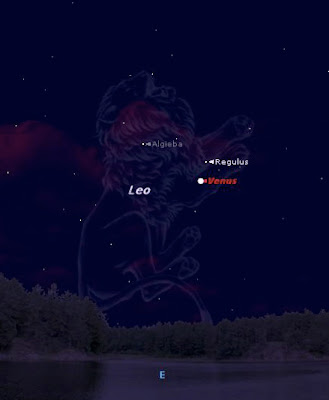 The Moon pays a visit to yet another planet this month - Mars.   We’ve recently been treated to stunning high-resolution photos of the surface of Mars beamed to us by Curiosity, NASA’s latest rover exploring our red neighbor.  But with a naked eye view from over 155 million miles, Mars looks like a dim red star hanging low in the southwest after sunset.  The thin crescent moon lies to the upper left of Mars on the evening of the 18th.   Lower left of Mars is Antares, a red giant star that resembles Mars in the sky.  In fact the very name Antares means “opposing” or “rivaling” Mars.  Antares and Mars may look similar in the sky, but that is all they have in common.   Antares is so huge that if it replaced our Sun it would extend well past the orbit of Mars!
And finally, for early risers, be sure and take note of the brightest planet, Venus beaming brightly in the east before sunrise.  This week, Venus is very close to the bright bluish star Regulus.   They should be visible at the same time in a pair of binoculars.
You can still catch Jupiter before daybreak also.  By that time it will be high in the southwestern sky.
at 10:00 AM