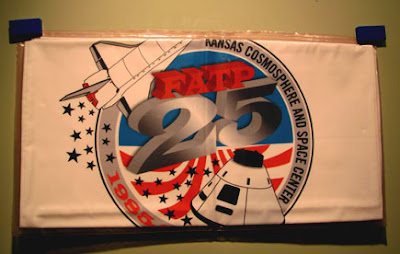 The Cosmosphere has received the FATP 25th Anniversary Flag flown on the Space Shuttle Atlantis mission that launced May 14. It just arrived at the Cosmosphere still encased in the fire retardant plastic everything goes up in. The flag is white, but the plastic is pink, which gives it a rosy hue. Around the edges, where it's sealed, you can see the pink more clearly.

Stephen Bowen, a Mission Specialist for STS-132, made arrangements for the flag to go into space on the final flight of Atlantis. 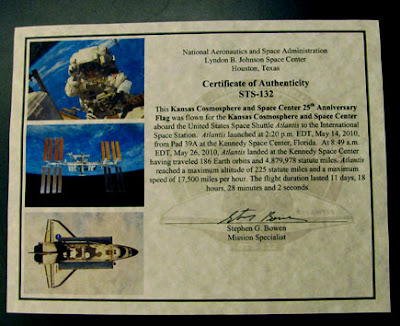 It's item number 47 on this list. It came with a certificate of authenticity signed by Bowen.

Bowen is the first Submarine Officer selected by NASA in July 2000 as a mission specialist. This is his second space flight. His first was STS-126 in 2008. Bowen has logged a total of 27 days, 14 hours, 57 minutes and 39 seconds in space, including 34 hours and 30 minutes of EVA in 5 space walks. 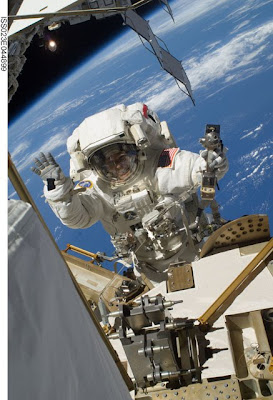 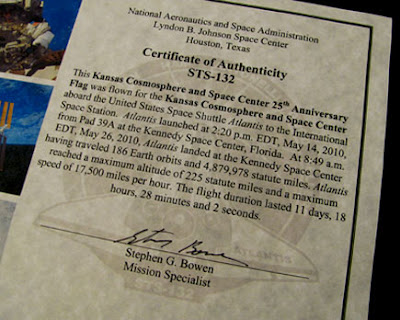 Read more about the flight, and see photos at http://www.nasa.gov/mission_pages/shuttle/shuttlemissions/sts132/main/index.html.
at 9:03 AM