Teresa Sindelar first came to the Cosmosphere as an 11 year old attending space camp in 1989. Now, she’s headed to NASA’s Johnson Space Center in Houston to be a NASA Education Specialist in the Teaching from Space Office.

Growing up in Nebraska, Teresa loved space, and wanted to go to camp. One year she and her mom were shopping in Omaha and Astronaut Tom Stafford was signing autographs in a jewelry store. He told her about the Cosmosphere and the next summer she was at camp. She said, “It was great. I loved every minute of it.” 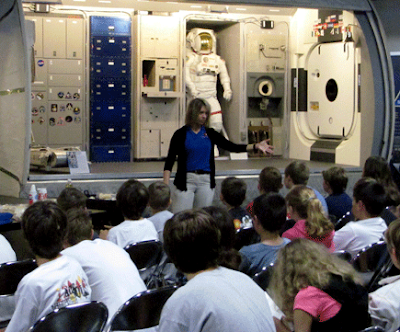 In fact, she came back a couple of years later for a Level 2 camp, and then worked as a counselor for three years. In 2002 she became a full-time employee in the education department at the Cosmosphere. She left five years later to teach in the Buhler school system while she worked on her master’s degree, but returned to the Cosmosphere in the summers to help with camp. But her dream was always to work at NASA.

Astronaut Clay Anderson, who she got to know when she was working at the University of Nebraska Planetarium, gave her some sage advice. She says, “He told me, ‘Do what you love, and NASA will find you.’” 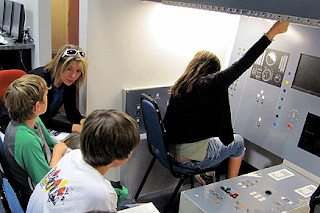 It was during her first year as a counselor at the Cosmosphere that she says she discovered she had a “natural talent” for teaching. But she says she “never thought I could teach and teach what I love.” In college she learned she was not an engineer or scientist. Although she had wanted to work at NASA for a long time, she said, “I never thought there’d be a job for me. I’m not an engineer. I’m not a scientist. I’m an educator.”

But she didn’t give up. She kept checking job listings and sought at least five different jobs over the years. She says, “I don’t even remember how many times I applied. I applied for jobs at NASA all the time and always got turned down,” most recently in January of this year. She applied for an education job and even though it required a lot of travel, which she wasn’t thrilled about, she wanted it. When they chose someone else she was crushed. “I thought it was done for me. Then this comes along, that’s 150 times better suited.”

"I have a very unusual skill set,” she says. "Everything I’ve ever done has led to securing this job. I don’t think I would have gotten it without my background at the Cosmosphere.” She said when she left the Cosmosphere to teach it was very difficult to leave, but she knew she needed to be in a classroom to get to her ultimate goal. She said the experiences at the Cosmosphere and Buhler made her a different kind of teacher. “Not a lot of people go to school to be an educator for NASA and there aren’t a lot of those jobs. Not a lot of people have that kind of resume,” she says.

In her new position she’ll be working closely with the astronauts, helping develop the curriculum they’ll use when they’re teaching from orbit. Part of her job is to help the astronauts talk to students at an understandable level. She says, “It’s a cool subject. To see kids get excited about it is the ultimate goal.” 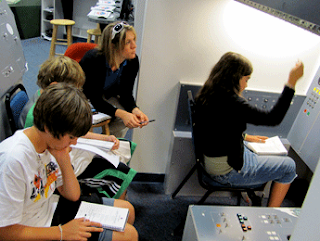 Asked if it’s her dream job she says, “It’s pretty darned close. I think this is what I am supposed to do.”

Teresa says her husband, Dan, is alternately excited and not. As she says, “It’s easy for everyone else to say ‘congratulations,’ but his life is being uprooted.” But, she laughs and says, “He knew this. He married this kid who wants to go into outer space.”

Everyone at the Cosmosphere is so excited for Teresa. She will join other Cosmosphere alums now working with NASA.

Best wishes to Teresa, Dan, son Mason and daughter Layla, for their new life in Houston. We’re going to miss having Teresa around the Cosmosphere.