Coffee at the Cosmo on Thursday, February 17, is entitled, “To the Moon: Snoopy Soars with NASA – Exhibit Highlights.” It is at 9 a.m. at the Cosmosphere and is free and open to the public.

The Cosmosphere is opening at new exhibit about Snoopy’s 40 year plus involvement with the space program on February 12. The exhibit is from the Charles M Schulz Museum and Research Center and examines the history of Apollo 10 and the Peanuts characters’ role in that flight.


In 1968 NASA approached Schulz about using Snoopy to encourage safety. Schulz agreed, but stipulated that he would draw Snoopy when he was used. Snoopy proved to be a big success with astronauts and employees. He is even the subject of the Silver Snoopy pin, a highly coveted pin flown on each mission and awarded by astronauts themselves. 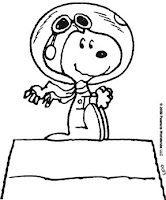 In May of 1969 the flight of Apollo 10 was the “dress rehearsal” for the lunar landing that would occur just a few weeks later when man would walk on the moon for the first time. The Apollo 10 crew nicknamed their command and lunar modules Charlie Brown and Snoopy respectively. Astronauts Thomas Stafford and Eugene Cernan piloted “Snoopy” within 50,000 feet of the lunar surface as they scouted the landing area for Apollo 11 while John Young orbited the moon in the command module, “Charlie Brown.”
Coffee this month will look at some of the highlights of this travelling exhibit, on display from February 12 – May 1 at the Cosmosphere.

The Kansas Cosmosphere and Space Center is a non-profit organization dedicated to enhancing patrons' knowledge of space exploration. Educating people from around the globe, the Cosmosphere boasts the Hall of Space museum, one of the most significant collections of U.S. and Russian space artifacts in the world; the Justice Planetarium, a dome-shaped classroom where attendees learn about astronomy; Dr. Goddard's Lab, a live demonstration of early rocket technology; the Carey IMAX® Dome Theater, one of the first ones built in the world; and summer astronaut training camps. For more information visit cosmo.org.
at 11:47 AM