Come to the Cosmosphere to Watch the Final Launch of Discovery 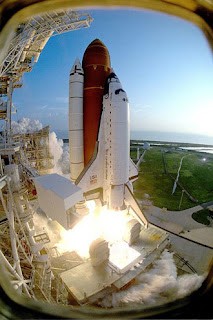 
This will be Discovery’s last mission. It was first flown in 1984 and has completed 38 missions, more than any other orbiter in the fleet. Discovery has completed 5,247 orbits and spent 322 days in orbit. Discovery was chosen to fly the “return to flight” missions after both the Challenger and Columbia disasters.

Discovery launched the Hubble Space Telescope in 1990, and carried astronaut John Glenn in 1998 when he became the oldest human being to go into space. It has performed both research and International Space Station assembly missions.

Please be aware that weather or other factors could affect the launch date and time.

The Cosmosphere plans to show the remaining shuttle launches as well. They are targeted for Space Shuttle Endeavour on April 19, and Space Shuttle Atlantis on June 28.
at 12:03 PM