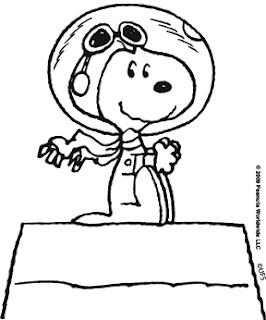 Snoopy Saturday at the Cosmosphere on February 12 is a day of fun activities to celebrate the opening of a new exhibit called “To the Moon: Snoopy Soars with NASA.” Snoopy has a long history with the space program and was even the first beagle on the moon.

From 10-3 on February 12 enjoy free activities including button making, temporary tattoos, a coloring contest, moonwalk and more. Kids will have a chance to make a straw rocket and their own command module. All those activities are free. Download the coloring sheets and get more information at www.cosmo.org/snoopy.

At 1 p.m. cartoonist Richard Crowson will be talking about cartooning and doing some demonstrations. The Wichita Eagle cartoonist was inspired by Schulz who created the Peanuts characters, including Snoopy. Crowson’s presentation is free to the public.

Snoopy will be making an appearance at Snacks with Snoopy at 11 a.m. For only $5 each, you and your child can share some goodies with Snoopy, see what happens when apples and liquid oxygen meet, make and enjoy food similar to what astronauts eat, and have a chance to take your photo with Snoopy. Tickets are limited for this event and can be purchased now by calling 620-662-2305 or 800-397-0330.

The exhibit, “To the Moon: Snoopy Soars with NASA” focuses on Apollo 10, which was the “dress rehearsal” for the moon landing a few months later when man would first walk on the moon. The crew nicknamed the command module and lunar module Charlie Brown and Snoopy respectively.

Of course, Snoopy beat everyone to the moon, making his moon landing in March of 1969. The exhibit will include that famous strip, as well as many other items, including a Silver Snoopy pin. Sliver Snoopy pins, one of the most coveted awards at NASA, have flown on every mission since 1969. They are awarded by the astronauts to people they feel helped significantly with their missions. Less than 1% of the NASA workforce receives one each year.

Snoopy Saturday kicks off the exhibit on February 12. Join us for a host of free activities that day for the whole family, including a free presentation to hear cartoonist Richard Crowson. Admission to the exhibit is included with any museum ticket.
at 10:12 AM