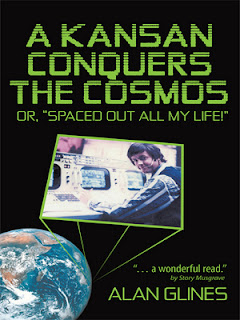 Glines worked at NASA for 13 years, beginning with the Gemini program in 1966 when America was in the space race with the Soviet Union. He also worked on Apollo missions at the height of the manned space program. Glines continued at NASA with the Skylab program before joining private industry in California, and eventually moving to Europe where he worked at the European Space Agency.

Glines book, “A Kansan Conquers the Cosmos,” offers a first-person glimpse into the aerospace industry. It covers his days as a science fiction-obsessed youth who ran a theatre at Kansas University as if it were mission control, to his time at NASA mission control, and beyond.

Over four decades, he acquired an extraordinarily rich tapestry of experience in the aerospace worlds of development and operations, and command and control, exploring no fewer than seven geographical and intellectual career paths.

Glines received his bachelor of science in electrical engineering from Kansas University and a master of science in systems management from University of Southern California. His story is a detailed and unique look at the aerospace industry and continues to inspire people today.
at 9:13 AM