TIV and Mike Smith at Cosmosphere 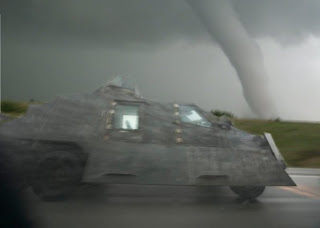 The TIV, short for Tornado Intercept Vehicle, will be at the Cosmosphere on Monday, April 11 from 10-7. The TIV is featured on the Discovery Channel show, “Storm Chasers,” and in “Tornado Alley,” now playing in the Cosmosphere’s Carey IMAX Dome Theatre.

“Tornado Alley” includes footage of the TIV inside a tornado. Driver Marcus Gutierrez and Meteorologist Brandon Ivey, both of whom are featured in the show and the movie, will be at the Cosmosphere on April 11. Their appearance is free to the public. Movie tickets are $8 for adults and $7 for children.

Schedule for the day - timing may vary slightly

TIV returns to Cosmosphere for viewing

Gutierrez served as U.S. Navy corpsman and is now a first-class medic trained in trauma, pediatric cardiothoracic surgery and orthopedics. He has provided emergency support for the TIV team, and is the official driver. Hopefully his medical skills will not be needed for the TIV team in the future.

Ivey has been interested in severe weather since age 16, after the April 26, 1991 tornado outbreak in Kansas and Oklahoma. He became heavily involved in the documentation of weather events about ten years later, after much research about storms. He earned his Broadcast Meteorology Certification in 2006 and a year later received a degree in Geosciences through Mississippi State University. 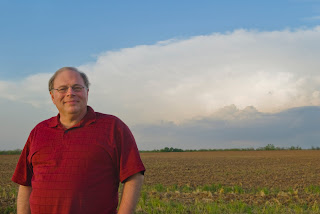 Smith is one of the world's leading experts in the application of weather science. Meteorologist, entrepreneur, and inventor, he created WeatherData Services, Inc., has been credited with saving countless lives and more than $100 million for his clients and the general public. Prior to founding WeatherData, Smith was a television meteorologist in St. Louis, Oklahoma City, and Wichita. He is a Certified Consulting Meteorologist and a Fellow of the American Meteorological Society. His first book is, “Warnings: The True Story of How Science Tamed the Weather.”
at 1:35 PM